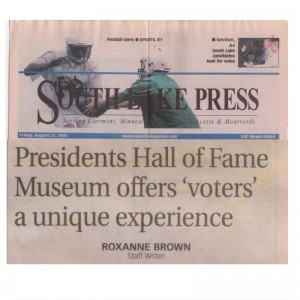 the Presidents Hall of Fame

CLERMONT City residents are accustomed to marking their ballot for the next commander-in-chief at the Presidents Hall of Fame.

But this year, there's a twist.

Voting is being tracked through a blog by long-time Clermont resident Ann Dupee on Patchwork Nation, a project spearheaded by Dante Chinni, a 16-year politi-cal journalist. So even more people than usual will know the views of Clermont's voters.

"We want to get as many people as possible coming in, so we can get a good picture of what's going on nationally," curator John Zweifel said.

Dupee has been working closely with Zweifel and Museum Coordinator Joy England to set up the voting box at the museum, where balloting began in July.

Zweifel hopes people will not only swarm to the polls in November, but to the museum to cast their vote. The project's goal is to present a new way to keep track of the election, the candidates and how they deal with the voters across the nation based on "real" people's views.

Chinni began by studying the demographics of every state and identified 11 different kinds of voter communities. He then mapped those communities county by county and selected one representative city for each category. Some of the categories he identified were Boom Towns for which he chose Eagle, Col., Evangelical Epicenters represented by Nixa, Mo., Industrial Metropolis by Philadelphia, Pa. and Minority Central by Baton Rouge, La.

Of the 11, Clermont was chosen as the representative community for the category of "Emptying Nests," because many longtime residents have children who have left for college or older people that have moved here to retire.

Chinni's information is garnered from visitors to the Web site. Now, Dupee is adding the voting results from The Presidents Hall of Fame in her blogs.

As people vote at the museum in Clermont, England will continue to track the results.

So far, presumptive party nominees Sen. Barack Obama and Sen. John McCain are running neck-and-neck with 85 votes apiece. England also counted 14 write-ins for Hillary Clinton, 1 for George H.W. Bush and 1 for Mickey Mouse, who is not expected to make the November ballot. England is trying to make it fun, allowing teens to vote privately, so their parents don't know their votes, much to the parents' chagrin. Each "voter" will push the button on the American flag next to the ballot box in order to record their vote.

After pushing the button however, most people leave with a smile, since it plays a portion of "The National Anthem" and "The Star Spangled Banner." "Everybody's enjoying it. I really think they are getting a kick out of it," England said. "We hope to be right on track with it (election results) as well."

Voting for both mock elections is open to adults and children who visit the muse-um, from 9 a.m. to 5 p.m. every day at the museum located at 123 N. U.S. High-way 27 in Clermont.