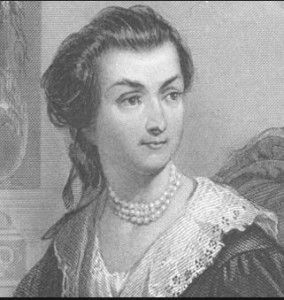 Abigail Adams (née Smith; November 22 [O.S. November 11] 1744 – October 28, 1818) was the closest advisor and wife of John Adams, as well as the mother of John Quincy Adams. She is sometimes considered to have been a Founder of the United States, and is now designated as the first Second Lady and second First Lady of the United States, although these titles were not in use at the time.

Adams's life is one of the most documented of the first ladies: she is remembered for the many letters she wrote to her husband while he stayed in Philadelphia, Pennsylvania, during the Continental Congresses. John frequently sought the advice of Abigail on many matters, and their letters are filled with intellectual discussions on government and politics. In one of her more famous letters she implores her husband and his colleagues, all of whom were male, to, "...remember the ladies . . .If particular care and attention is not paid to the Ladies we are determined to foment a Rebellion, and will not hold ourselves bound by any Laws in which we have no voice, or Representation." Her letters also serve as eyewitness accounts of the American Revolutionary War home front.

John Adams was inaugurated as the second President of the United States on March 4, 1797 in Philadelphia. Abigail was not present at her husband's inauguration as she was tending to his dying mother. When John was elected President of the United States, Abigail continued a formal pattern of entertaining. She held a large dinner each week, made frequent public appearances, and provided for entertainment for the city of Philadelphia each Fourth of July.

She took an active role in politics and policy, unlike the quiet presence of Martha Washington. She was so politically active, her political opponents came to refer to her as "Mrs. President". As John's confidant, Abigail was often well informed on issues facing her husband's administration, at times including details of current events not yet known to the public in letters to her sister Mary and her son John Quincy. Some people used Abigail to contact the president. At times Abigail planted favorable stories about her husband in the press. Abigail remained a staunch supporter of her husband's political career, supporting his policies, such as passing the Alien and Sedition Acts.
Adams brought the children of brother William Smith, her brother-in-law John Shaw, and her son Charles to live in the President's House during her husband's presidency because the children's respective fathers all struggled with alcoholism. Charles' daughter, Suzannah, was just 3 years old in 1800 when Adams brought her to live in the President's House in Philadelphia days before Charles' death.

With the relocation of the capital to Washington, D.C. in 1800, she became the first First Lady to reside at the White House, or President's House as it was

| Abigail Adams and granddaughter Susanna watch as a servant hangs laundry in the East Room– by Gordon Phillips
then known. Adams moved into the White House in November 1800, living there for only the last four months of her husband's term. The city was wilderness, the President's House far from completion. She found the unfinished mansion in Washington "habitable" and the location "beautiful"; but she complained that, despite the thick woods nearby, she could find no one willing to chop and haul firewood for the First Family. Abigail did use the East Room of the White House to hang up the laundry. Adams' health, never robust, suffered in Washington.